Retirees, fasten your seatbelts. Prices are marching upward, with the Consumer Price Index rising at an annualized rate of 8 percent from April through June 2021, with no end in sight.

Federal Reserve Chairman Jerome Powell, the keeper of the money temple, maintains that these price jolts in everything from Oreos to snowbird rental houses are transitory, pointing to supply chain issues and conditions of general Covid weirdness. Yet adherents to the monetarist school of economists, whose approach broke the great inflation of the 1970s, beg to differ. “Inflation is always and everywhere a monetary phenomenon,” taught the late, great Nobel Laureate Milton Friedman. It’s too much money chasing too few goods.

Chief among the old-school monetarists is First Trust chief economist Brian Wesbury, who notes that the trillions of dollars in stimulus checks and other Covid government support boosted the money supply by 30 percent in just 15 months; at the same time, mandated shutdowns squashed output. The result was swollen bank accounts and empty shelves. Astonishingly, Americans emerged from an alleged recession with $2 trillion more in their bank accounts than when it started. With an effective vaccine in our arms, that money is heading straight into circulation as we do the same.

This should be of concern to the millions of Americans who are either collecting, or basing their retirement happiness on collecting, a corporate pension.

From a recipient’s perspective, a pension is simple. Upon retirement, he or she will get a monthly check, on the same day, for the same amount, until the recipient, and the spouse if a joint payout is elected, need the services of an undertaker. With few exceptions, it’s a fixed payment for life.  (This distinguished it from Social Security, which protects its purchasing power with a potential annual cost of living adjustment.)

Although these financial beasts are getting rarer, a 2016 survey of actual retirees with at least $50,000 of investments found that eight in ten received some monthly income from a pension. Fourteen million more Americans expect to do so in the future. In my practice, many clients rely on pensions for a substantial portion of their income.

Money for Simply Breathing. What Could Go Wrong?

It’s easy to grasp the dangers of a fixed income in a world of rising prices. How much those prices rise, in fact, determines the value of a pension.

Let’s run some numbers. Consider Ed and Bev, a 65-year-old, just retired couple. Bev has cashed her first monthly pension check for $5,000 from the utility for which she worked for 40 years.  Ed’s had a few health challenges, so Bev elected the single-life option that pays her the most but ends when she does. (To protect Ed, she purchased some surprisingly low-cost life insurance that lasts until she’s 80.)

A consultation with the Social Security website https://www.ssa.gov/cgi-bin/longevity.cgi tells us that Bev is expected, on average, to live 21.6 more years. Averages say nothing about an individual, however. She will of course live longer or shorter, and perhaps by almost two decades either way. Still, we can use this base to calculate some values.

Bev’s first retirement (pension) check is worth $5,000. At 2 percent inflation (depreciation of the value of the dollar), close to the 2.18 percent she would have experienced for the last 20 years, her last payment, if she lives for her expected life span, will be worth roughly $3,300--35 percent less. Consider this the baseline, or perhaps the best for which she can hope.

This 2 percent is the Fed’s target. If it misses the mark and comes in at 2.5 percent owing to transitory effects, her check erodes by more than 40 percent to just over $2,900 a month. Inflation that averages just over 3 percent will cut the value of her last pension check in half. 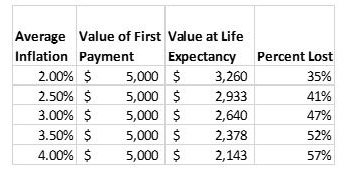 Another way to examine this is to consider the value of the pension as a lump sum at retirement. It’s the opposite of Bev’s investments, where the balances are known but the total value will be determined by rates of return and timing and amounts of her withdrawals. With the pension, the payments are known, but the net present value of the pension depends on how long she lives and on how much her cost of living increases.

What if transitory severe inflation occurs, providing a short period of price pain and then returning to the normal rate of decay? We have two years of 8 percent inflation as the Fed, Congress and the President do their best to provide everyone with paper, for example. After that, we drop back to a more sustainable price growth. The result is even greater pension theft.

This scenario is particularly perilous to people close to retirement. They get the up-front depreciation but likely won’t have time for employers to boost their pay for enough years to increase their payments. The Fed whacks these folks in the head and they then get to stumble through the rest of their retirement.

What strikes me as a practicing financial planner—and should strike you as a pre-retiree no doubt getting pitched on the value of income annuities for income you can’t outlive—is the relationship of the net present value of the income stream to the actual dollar value of the checks at advanced ages.

Retirees and their advisors are told relentlessly that fixed pensions—be they provided by former employers and called pensions or purchased in the private marketplace and called fixed income annuities--provide lifetime income that protects against poverty in old age. The math shows that these vehicles hold up well for total value. At 2 percent inflation, the total value is 80 percent of nominal dollars withdrawn, dropping to 66 percent at 4 percent inflation.

Yet at advanced ages, pensions and annuities put the income squeeze on anyone relying on them for a mainstay of their consumption. At 2 percent, a dollar in the last check cashed is worth only 65 cents in current-year dollars. At 4 percent, it’s not even worth a famous rapper, 50 cents or two bits, to quote my grandpa.

At this point, the early money is already spent and seniors—unless they have savings and investments--are left with drastically depreciated checks to purchase stuff they want and perhaps need but can no longer afford in their advanced years. Welcome to the world of fixed nominal payments in a time of inflation.

My training in economics as well as 50 years on this planet convince me that the economic and social incentives people face strongly influence their actions. There’s no denying that policymakers, regardless of political and ideological orientation, have a professional interest in inflating prices (debasing the dollar). They also have a personal hedge, since their federal pensions and sometimes their salaries are adjusted for inflation.

Debtors benefit from inflation, as it erodes the value of their liability. Your fixed-rate mortgage, after all, isn’t increased for the cost of living. Over time, your salary likely will be. For federal employees, this is a locked in guarantee since 1961.

The US government is the world’s largest debtor and it’s going deeper into hawk at mind-boggling rates. It also desperately needs low interest rates to keep the costs of its past and expected purchases affordable. Talk may be cheap, but our government’s promises likely won’t be for us and our progeny.

For evidence of this, you need to look no future than writers for the New York Times and Wall Street Journal who are noting the already mentioned benefits of inflation and low interest rates as the erosion of debt for student loans, mortgages, and the U.S. government.

The current policy seems particularly brutal on conservatively invested seniors and pensioners. When we last experienced much higher inflation in the 1970s, at least people could count on real interest from government bonds and banks. CDs peaked at 18 percent in March 1980. As recently as 2008, a person could secure a six-month CD at more than 5 percent interest. The real value was likely eroded by taxes, depending on one’s rate, but at least the interest provided lubrication to make the cash saving transaction slightly less brutal.

Since the financial crisis of 2008, the official US government policy has been to explicitly transfer wealth from savers to borrowers by using every tool at its disposal to keep interest rates low. Today, with Chairman Powell’s Fed committed to minuscule interest rates and increasing prices, there’s nowhere to hide and only one place to run: more volatile assets. This is exactly where many retirees fear to go.

No Such Thing as Safety

When it comes to finance, nothing is safe in all environments and every investment option will prove risky in some environments. Insured corporate pensions, a government-backed fixed income asset, at first appear to be 100 percent safe. As you can see, they are in fact subject to economic forces. What seems so comforting in early retirement may in fact prove painful in your later years. Like the smooth pleasure of menthol cigarettes in one’s youth, the price paid is debilitation if not complete destruction of life at advanced age.

At the end of the day, there’s nothing a person can directly do about the likely eroded value of a corporate pension. That’s a given, as are economic policies made and influenced by forces over which you likely have no control.  A pensioner’s best course, therefore, is to understand the long-term possibilities of this fixed-income asset and the proportionate value in his or her financial life, and to invest remaining investable assets (consistent with individual tolerance for shorter-term volatility) in businesses and investments that should prosper or at least keep up in an environment of rising prices.

When the government renders safe assets risky, you have little choice but to offset them with riskier assets that, ironically, have just been made safer compared with the alternatives.

Michael Lynch CFP is a financial planner with the Barnum Financial Group in Shelton CT, a member of Ed Slott’s Elite IRA Advisor Group and the author of Keep It Simple, Make It Big: Money Management for a Meaningful Life, October 2020. You can find more articles and videos at michaelwlynch.com. He can be reached at mlynch@barnumfg.com or 203-513-6032.

Securities, investment advisory and financial planning services offered through qualified registered representatives of MML Investors Services, LLC. Member SIPC. 6 Corporate Drive, Shelton, CT 06484, Tel: 203-513-6000. Any discussion of taxes is for general informational purposes only, does not purport to complete or cover every situation, and should not be construed as legal, tax or accounting advise. Clients should confer with their qualified legal, tax and accounting advisors as appropriate.  CRN202408-637020